Following my last blog, a great many asked “when are we going to see photos of the house?”… So, your wish is my command and you’ll find a few interior photos throughout the text below.

Since we moved in, the major change has occurred outside, in the garden/yard. The previous owner – who assuredly didn’t like gardens or gardening – had, to our eyes, created a butt-ugly lunar landscape of lava rock and cacti (perhaps to avoid any work or maintenance); about the least dog friendly environment you can imagine, unless you introduced a few nests of scorpions and rattlesnakes! As there were also trees that needed moving and ‘disappearing’, we called Roberto – someone who was recommended to us – and, in fact, found ourselves working primarily with his assistant, Luis, a more delightful gardener – sorry, horticultural engineer – you couldn’t meet.

Over the space of four days, between three and six Mexican gardeners, at any one time, stripped out all the rocks (around 50 large sack loads) and cacti – leaving only those plants without thorns or prickles of any sort – laid a lush carpet of prairie grass, and built retaining walls to create flowerbeds from some of the larger rocks, into which they deposited numerous sacks of topsoil. Okay, topsoil here is not the loam-rich product we’ve been used to buying in BC, but more akin to… ‘dirt’. Not bad. Just different!

Perhaps a little disappointing to Luis – who is the plant specialist and plays an architectural role in garden projects – I asked him not to do any planting. Instead, we went on a voyage of discovery around the various local garden centers. It was akin to journeying down Alice’s rabbit hole, because some were inconspicuous gateways that opened into stunningly vast areas of horticultural heaven. It was something of a challenge, however, because they haven’t adopted the habit of labelling the plants and, of course, whenever I asked for names, they were provided in Spanish. Duh!!! Okay, Latin I can do and, fortunately, I’d brought a shelf of gardening books with me, so armed with some useful local research, the odyssey began.

Now, a quick para that might be boring for those of you who aren’t gardening fanatics – we are in zone 10 (bordering on 9b and 11, depending on the time of day, altitude and orientation – we face south). Plants that grow as annuals in most other places, thrive and bloom here year round. However, with a roughly three-month rainy season (June, July, August – plus/minus a couple of weeks at either end), drought-tolerance or minimal watering are also good to bear in mind, alongside being attractive to hummingbirds and butterflies, bug resistant… You name it!

Continuing for the gardeners, but also the economists among you, having started with a bare yard in our last house, which was still a work in progress after 10 years, I hate to think what we spent on plants. Did I mention they don’t label plants with either common or scientific names here? Yep! Well, it’s also rare to find prices! So, it was with something of an air of optimistic ignorance that we visited the first garden center having loaded up with pesos at the nearest ATM.

This one, this one, this one, that one… and so it went for nearly an hour of ‘must haves’, when we called a halt having already filled the back of the SUV for the grand total of… 1,275 pesos – less than $100 Canadian. Yikes! If you’ve ever seen the TV ad for IKEA’s annual sale, with the wife running after the husband yelling “start the car”… well that was us as we drove away beaming with delight.

But the story doesn’t end there. Speaking to some gardening friends, they said “you must go to … [driving directions followed] … It’s the best garden center in the area.” So, the next morning, off we trekked. Ha ha!!! If we thought we’d got a good deal at the first place, the second was mind blowing. Okay, here’s the list – basically, once again, what we could fit into our vehicle – and, bear in mind, everything came in at least 6” or 1 gallon pots…

Sadly, the oleander have now been rehomed with someone who doesn’t have dogs as all the plant parts contain toxins that can cause a nasty list of symptoms, and may even be fatal to domestic pets! Although I love the brugmansia, which grows like a weed here, I’d avoided it for the same reason! Having said that, I know a few people who are growing oleander in their gardens and have dogs, but they haven’t met our Jenny – not quite a year old, who explores anything and everything new with her mouth!!! The moral of the story is that I should take my garden encyclopedia with me when I do a nursery visit. But, okay, the purpose of this list was to illustrate the joys of gardening here without breaking the bank. Far from it….

To conclude with the gardening epic, we have discovered one challenge, so far. “Only one”, do I hear you cry. Be assured that it’s not the bane of West Coast gardens – ‘moss’ – but leaf-cutter ants; critters akin to locusts in their eating habits, especially succulent leaves and sap-rich stems. Two fuchsia were targeted the first night and, thankfully, survived minus only a few leaves, so am now armed with a tub of eco-powder that appears to be deterring the invading army. According to Luis, the ants are transient and will move on once a buffet table is closed but, of course, everywhere is on their radar for revisiting so, like moss, it will likely be an ongoing battle. 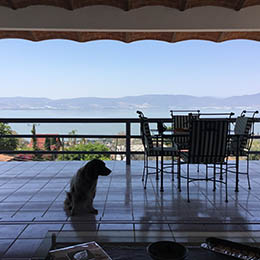 Which brings me to another list! Typically, my shopping list at the weekly street markets. Called Tianguis (tea-an-geese), there’s a local circuit with vendors moving to new towns and setting up their stalls each day. Specifically, my go-to ‘stuff’ is fruit, veg and shrimp, and I now use the same vendors every Wednesday in Ajijic as they now recognize me and I feel like a returning family member. This past week, my produce from the veggie guy…

The ‘kilo’ of fresh shrimp I usually buy seems quite an extravagance at 190 pesos (CAD$13.41), but it’s enough for two or three dinners and one lunch. I can’t recall what I used to pay for frozen shrimp in Costco!!!

Garden, done! Next major task is the kitchen reno, and when the time comes I’ll do some before, during and after photos. Pity IKEA has yet opened any stores in Mexico! As it happens, you don’t need big-box stores because local carpenters will build your ‘dream’ kitchen from scratch… In solid wood! For a fraction of the price! Currently, we’re in the process of inviting quotes from people who’ve been recommended to us, so it’s an ongoing project. Before a carpenter can start work, however, I have to choose some appliances so the installation dimensions can be incorporated into the cabinets, and a trip to Guadalajara with a friend in a similar situation revealed an Aladdin’s cave – or rather an Aladdin’s 20 blocks – on one of the city’s main drags. Virtually every store offered kitchens and baths on an epic scale, and I’ve never seen such an array of loos/bogs/WCs/biffys of every genre. More than you can shake a stick at! Do I want a heated, soft-close toilet seat that plays a tune and squirts water at your bum on demand? Or even need, a fridge that also brews coffee and I can operate from my smart phone? OMG! Dishwashers with look-see windows in the doors (maybe an alternative to TV!). It’s been 10 years since I last purchased major appliances, and I couldn’t believe the bells and whistles that are now being added, whereas I’d prefer to buy something basic and efficient that provides longevity beyond the one-year warranty period!

I’ve realized that it’s a process of elimination rather than choice, with price being the primary factor. Unlike the regular cost of living – non-Mexican appliance brands are a little, or a lot more expensive than you’d pay in North America, with price tending to be brand sensitive and sometimes dependent upon country of origin. While Mexican brands don’t come with any high-tech add-ons, they also don’t appear to be as robust and haven’t yet caught up to the 21st century in terms of design aesthetics, so not yet sure whether I can take the plunge into totally unfamiliar realms. To say nothing of installation and instruction manuals written solely in Spanish that would test my language skills and not be worth the accompanying insanity!)

Watch this space, because if our kitchen reno in France many years ago was anything to go by, this project will have Oscar-worthy drama, comedy and farce… peppered with frustrations and absurdities written all over it.

Until next time – hasta luego…

7 Replies to “Back, by popular demand…!”