In the very recent blog, I posted a photograph of our lounge with the fireplace in the background sporting a colourful lizard.

I admired this piece of artwork the very first time we viewed the house, recognizing it as the same style of artisana as the armadillo we’d purchased at a Christmas fair in Chapala last November. So, when the previous home owners decided to consign the lizard to their estate sale we, of course, jumped at the chance to buy it. I later learned that the lizard was a piece of Alebrijes from Oaxaca, famous throughout Mexico as each sculpture – typically of a fantastical creature – is totally unique. Of course, this got my journalistic juices flowing and, in the name of education and enlightenment, my subsequent research unearthed some interesting historical traditions and facts that I’d like to share. 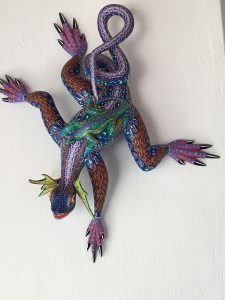 Alebrijes originated in the 1930s in Mexico City when an artisan, Pedro Linares, fell very ill with a fever, and during a period of unconsciousness he dreamt of a strange forest where trees and animals turned into unnaturally coloured and unrecognizable creatures. According to a Wiki entry, ‘He saw a donkey with butterfly wings, a rooster with bull horns, a lion with an eagle head, and all of them were shouting one word, “Alebrijes”’. When Linares recovered, he started re-creating the fantasy creatures in papier maché and called them… Alebrijes.

His remarkable artistry was noticed by none other than Diego Rivera and Frida Kahlo who began commissioning Alebrijes. (Works of Linares created for Rivera are now displayed in the Anahuacalli Museum in Mexico City.) The Alebrijes tradition ballooned after the release of British filmmaker Judith Bronowski’s 1975 documentary about Linares.

In the 1980s, during an itinerant Mexican arts and crafts demonstration workshop in the United States featuring Pedro Linares, a textile artisan became fascinated with the Alebrijes figures. Her name was Maria Sabina, from Oaxaca.

The Oaxaca area has had a history of carving animals and figures out of wood since the pre-Hispanic period, and Linares demonstrated his designs during a trip to visit family nearby. Subsequently, an Arrazola native, Manuel Jiménez, pioneered the process of adapting the Alebrijes from papier maché into wood, coincidentally using a local wood called copal which is said to have magical properties.

Many rural Oaxaca households have prospered since the 1980s through the sale of their brightly coloured Alebrijes – a marriage of native woodcarving traditions and the influence of Pedro Linares’s work. And, as the Oaxaca region opened to tourism with the construction of new roads, carvers who had formerly supplemented their farming income with the sale of Alebrijes, were able to establish their craft, creating a new generation of Alebrijes.

The Alebrijes market includes both the unique, high-quality, labour-intensive pieces that have garnered a celebrity following (including the Rolling Stones and David Copperfield), alongside more mass-produced and inexpensive pieces (which I’ve noticed are easily distinguishable for their lack of quality in both the finished carving and the intricacy of the painted designs).

Carving begins while the wood is still wet, and the natural growth will influence the end piece. Only non-mechanical tools are used, such as machetes (to hack the basic shape), chisels and knives. Details such as ears, tails and wings are typically made separately, and one of the most important things about the fantastical creatures carved out of wood is that every piece is removable – indicating that it has been made by a master carver. (Ours wasn’t – but is still very beautiful.)

After the carving is complete the figure is left to dry for up to ten months, depending on the size and thickness of the wood. Pieces are often soaked in gasoline and baked to ensure that all insect eggs have been destroyed, as copal wood is rather susceptible to infestations.

Work is often shared among family members, with women taking responsibility for the intensely coloured and intricate painting process. Although the original Alebrijes were painted using all natural pigments and ingredients, the majority of carvers are now using acrylics that resist fading and are better able to withstand repeated cleanings.

Today, three towns in Oaxaca are especially noted for their skillful carvers and exceptional work: San Martin Tilcajete, Arrazola and La Unión Tejalapan. Outside of this area and Mexico City, the majority of Alebrijes are made by hobbyists.

Mexico City still celebrates the birth of Alebrijes with an annual parade, and several characters in the 2017 film, Coco, are Alebrijes.

So, this is the condensed story of our Alebrijes lizard – which is around two-feet long, and continues to hang proudly over the fireplace – and I’m sure this piece and our small armadillo will gather a few friends into the future.

8 Replies to “As promised – the story of our lizard”