Well, I confess that today’s landscape lacked the spectacular vistas of yesterday’s Arches and Canyonlands NPs – although the high desert through the southern half of Utah, south-western corner of Colorado and into New Mexico was… interesting. Many hours driving at around 7,000 feet and unusual rock formations, but rather endless and unchanging. So, I thought today would be better spent writing about some of the social and cultural observations along the route.

As Peter maintains a rule of always filling up when the gas tank is still half full – which is just as well as we drove for hours today without seeing any signs of life, let alone a gas station. Anyway, Peter refilled just as we left Monticello. Now, when I say small town most people refer to a ‘one-horse town’ as being representative of size – so where we stopped for gas would have been classed as a horse’s ass, or one-leg town as it certainly wasn’t big enough to warrant one whole horse!!!

Anyway – we had been following a truck loaded with furniture – and I mean loaded. In fact, the truck’s vintage was Beverley Hillbillies – minus Ma Clampett sitting in her rocking chair atop the household belongings! The guy was driving very carefully to avoid losing any of his load. Peter was behind him in the line to pay after he filled up and came out chuckling as the guy had dispensed a grand total of US$3 worth of fuel into his truck. Well, it gave us the best laugh of the day, and Peter also noticed that he was the only one not wearing a ball cap – so it must be a badge of honour among certain US brethren – undoubtedly ‘Trumpets’ and, the female version, ‘STrumpets’ as they too were similarly hatted.

It was noticeable that many of the miles we covered today were over tribal lands – endless vistas of sage brush and scrub pine with the occasional intervention of a part-horse town that were somewhat bizarre. Many boarded-up stores, short strip malls that included ’native loan’, ‘pawn’ shops and propane depots side by side with a mobile-home park. Then, a laundromat – not what you might imagine, but a palatial edifice, the size of an entertainment venue, so one has to wonder whether they serve a multi-use purpose: Weekly hygiene trips that are also social gatherings and, maybe, even bingo! We didn’t stop to find out, but it was certainly a little weird. In addition, between some of these towns, as far as 100 miles from any residence, a massive modern casino! Who travels all that way to lose money? Are they simply robbing their own people by providing the ultimate gambling opportunity, or perhaps it’s a handy way of recycling reservation money! 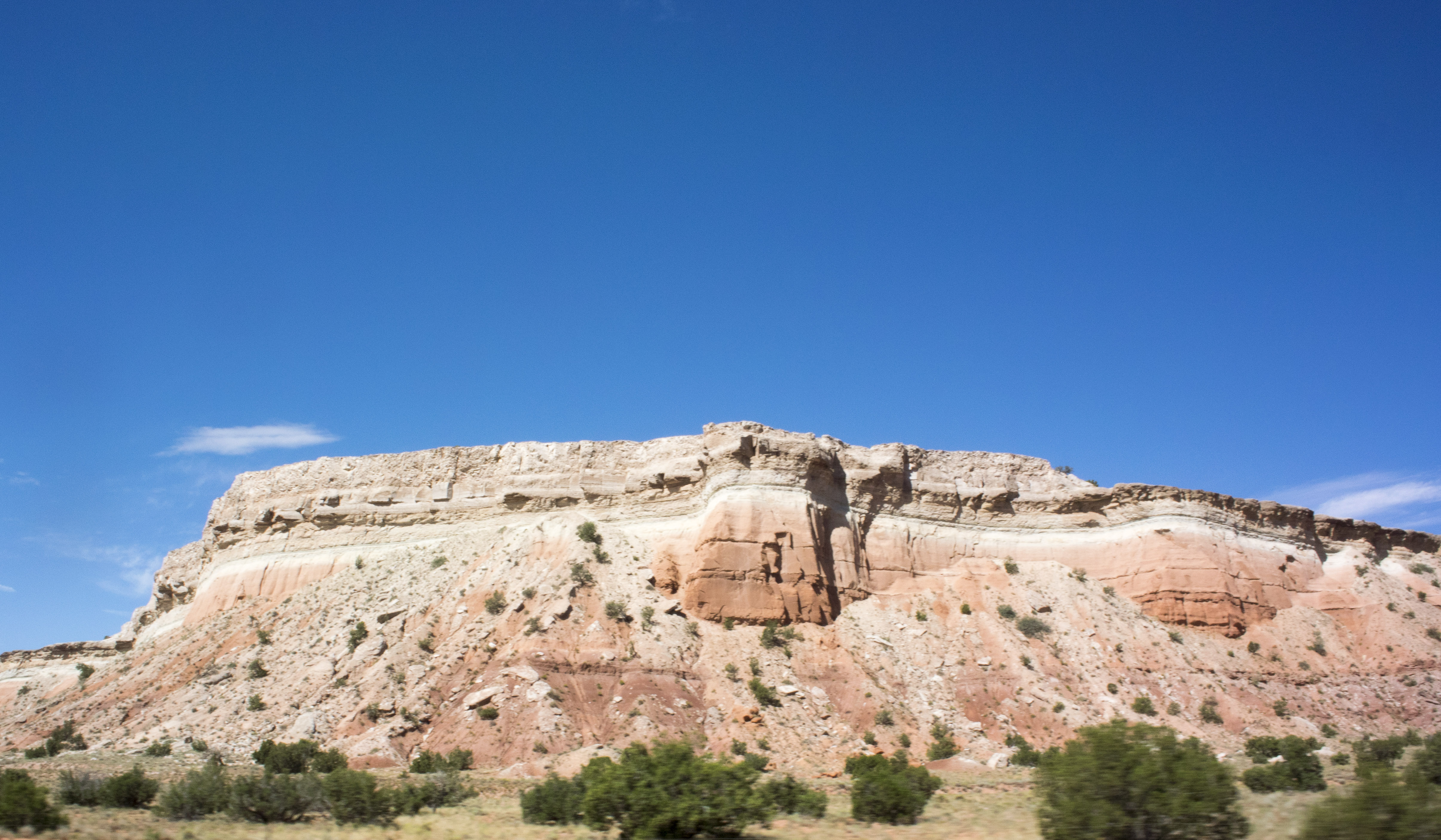 Perhaps also indicative of one of the other ‘native’ issues was the proliferation of ‘Report Drunk Driving’ signs along the road. Interestingly, every one had been pockmarked with shotgun pellets! A test maybe? If you can hit the sign, you can see sufficiently well to drive! The signs included a phone number, mostly obliterated, but as the nearest sheriff’s office is likely an hour away…!

One of the more interesting landscape features across the high desert was the sculpted outcroppings of rock that towered above dry gulches – at least, they’re dry at this time of year. But as the area is famous for flash floods, it’s not difficult to imagine cloudburst water being funnelled into the mini-mini canyons and, as Peter said, if you could return in several thousand years you’d perhaps find another Grand Canyon as rain and erosion deepen these recesses. By then, of course, the human race will perhaps be extinct by its own hand so there will be no one around to witness another of the world’s wonders.

So, to end, I laughed out loud when I read a letter posted in our room at the Days Inn in Victoria – and had forgotten about until this evening. It was the copy of a handwritten letter – so, easily decades ago – written by a gentleman to the manager of a hotel, requesting a room reservation. He also mentioned: “I will be accompanied by my dog, who is mightily trained and well-behaved, and I wonder if I might be allowed to have him with me in my room?” In response, the hotel manager said: “Sir, In all my years of managing hotels, I have never known a dog to pilfer the ashtrays and towels, or steal the prints off the walls, so if your dog can also vouch for you, you are both more than welcome to share a room at this hotel.”