Before I begin – many thanks to friends, Anne and Sandra, who were kind enough to answer the question about Canada’s bi-lingual status. Apparently, Quebec’s provincial government mandates the use of French only on road signs, but even more interesting, from Sandra: ‘Of Canada’s 10 provinces, only one (New Brunswick) has voluntarily chosen to become officially bilingual. New Brunswick’s bilingual status is constitutionally entrenched under the Canadian Charter of Rights and Freedoms.’ I do love learning new things about our ‘home’ country.

Although our hotel room last night was disappointing, we both slept like logs until the crack of dawn (5:30), when Ellie’s day begins by licking our faces with an up-and-at-‘em enthusiasm that can’t be denied. Of course, as we’d crossed one time zone yesterday, skipping ahead one hour, our body clocks were telling us it was only 4:30, but what the heck. As it happened, the sun was already up and there were quite a few people repacking their cars, hauling bicycles out of rooms and hefting them onto carrying racks, so Peter joined the moving throng and gave the dogs their first walk of the day. I should also point out that Ellie’s need to pee is never urgent first thing in the morning, she’s simply joyful that a new day is about to begin and she can’t wait to get going. 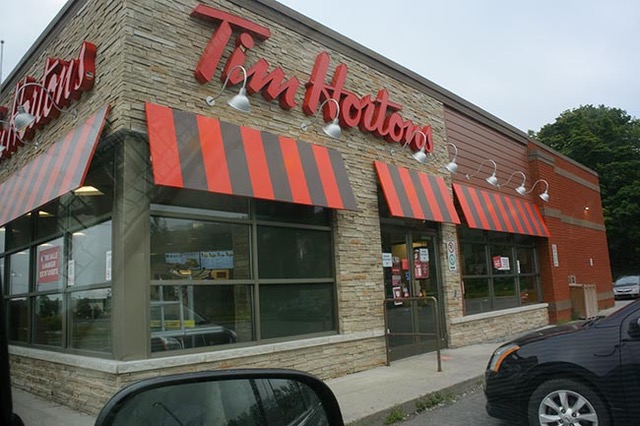 Of course, the Days Inn motels, together with most other hotels, are not opening their breakfast rooms, but providing grab-and-go bags of goodies – but not until 7:00 a.m. Do they do this deliberately, I wonder, to avoid providing breakfast for all the early risers who head out before the soggy muffins and stale croissants arrive? Sorry – I have no idea whether this derogatory description would have matched Days Inn’s offerings, but needless to say we headed out before the bags arrived and stopped at the first Tim Horton’s for whole wheat toasted bagels and steaming mugs of freshly ground coffee. As it happened, on the opposite side of the road was a fabulous rest area overlooking the St. Lawrence, so we enjoyed the view while we consumed our welcome breakfast.

Onward to Saint-Lazare – a town on the western side of Montreal, and home to very good friends of ours, Cealy Tetley and her husband, Bryan, who’d invited us to stop for lunch. We’ve known Cealy – an equestrian photographer – for some 30 years, crossing paths every few months during the 1980s and 90s in occasionally exotic locations around the world that happened to be hosting a major horse show, although meetings dwindled to few and far between over the past decade, usually limited to the three  major ‘Games’, Olympic, Pan-Am and World Equestrian. So it was an especially happy reunion today, which included a much appreciated lunch, a good chat, a walk through some nearby woods with the dogs, while I got eaten alive by mozzies – well, nearly. Okay, I have half a dozen lumps and bumps, courtesy of these beastly blood suckers that I’ve been slathering with copious amounts of anti-bite cream for the past few hours. And, Covid-19 be damned, it was hugs all round before we left. All in all, an absolutely fabulous interlude in an otherwise very hot day when the air temperature hit 29 degrees – but thank goodness for air-co, which kept the car cool inside for the dogs to enjoy their long afternoon nap.

So tonight, around 1,800 kms under our tires, and we hit our pre-booked room at the Clarion Hotel in Pembroke, ON. What a difference to last night. An up-market room with space to swing 10 cats, comfortable chairs, a nice desk at which I’m sitting typing this blog, while a Keurig burbles away in the background churning out cups of tea (me) and coffee (Peter). The dogs are well fed and watered, and we ordered a very tasty parmesan-shrimp spaghetti from the local Boston Pizza that was delivered… without cutlery. The response from the delivery guy: “You’re supposed to ask for cutlery.”…. Or, maybe it would be a better idea if the person who takes the orders asks the customers whether they need cutlery! Thankfully, it was only a two-minute jaunt for him to bring plastic knives and forks (for which he didn’t get a second tip) so we could eat and, as it happened, the portions were so huge we’ll have the same again (microwave reheated) tomorrow when we reach Wawa. Yep, that really is a place name in northern Ontario, and I have a feeling that it might have some interesting stories for me to tell. Certainly, Peter’s already referring to our tomorrow-night stay at the ‘Bates Motel’.

One of the challenges when you hit northern Ontario and skirting around Lake Superior, is the lack of towns with accommodation, so trips have to be carefully planned to take account of distances and driving time or you might end up sleeping in the car in some backwoods lay-by while ‘Duelling Banjos’ provides menacing background music. (Let me know if you need an explanation!) Hence, our planned overnight stop in Wawa en route for Thunder Bay and points west.

6 Replies to “Through Quebec, and into Ontario…”