It’s not something you see every day, and certainly not all in the same day. But…! A gloriously sunny morning after a subtropical cyclone passed through, pushing hot air and 100% humidity ahead of it – which made for a rather uncomfortable night – the surfers were out in force at Cherry Hill Beach, taking advantage of a good swell to ride the waves. However, a fun-loving blue shark – around the size of a large sedan – decided it was also a good time for some beach-side grazing, and created a watery stampede when surfers decided to beat a hasty retreat.

Blue sharks – so named for their blue colouring – is, apparently, the most prolific of the large shark species and abundant throughout its range. Found from Newfoundland south to Argentina, it’s the most common large shark seen in Canadian waters. Highly migratory, they usually occur near the surface where water depths are greater than 200 metres – so ‘Bluey’ obviously decided to join the wetsuited throngs for a spot of fun, but without the board!

However, two hardy souls – maybe thinking they’d scare off the unwelcome visitor by flashing their genitalia – stripped off and ran into the surf in their birthday suits! Or, perhaps they’re simply freedom-loving locals for whom skinny-dipping is a regular pastime and simply couldn’t resist the call of the waves on such a dazzling morning. Decided to respect their privacy and only show the back view!

As many of our friends already know, when we bought our Mexican house, we also acquired a piano from the previous home owners – an upright grand built by the Toronto-based Heintzman company in the late 1930s. Throughout my life, on two occasions, I’ve owned a couple of digital keyboards: One inherited from my mum that I seem to recall was only a three- or four-octave table-top model, and another, much later, that Peter bought for me, together with the Idiot’s guide to reading music, Reading music for beginners… etc., because I didn’t want to simply use the one-finger chords suggested in the digital manual, but actually learn to play music properly. However, no matter how much I tried, reading music was like learning double-Dutch – a language around which my brain had built an insurmountable firewall.

At the time, I recalled my schooldays of learning to play the recorder. I was actually quite good instrumentally, and progressed to playing both tenor and treble models, as well as a triangle J, a tambourine J, and a glockenspiel. LOL! But, in order to play in my school orchestra, I had to take each piece of music home and studiously translate the assembled dots and symbols into pencilled notes: i.e. C, F, G, A, B, etc., otherwise my brain just couldn’t reconcile what I was seeing on the page into what my fingers should be doing. Duh!

However, an ambition since childhood, when I used to plunk out Broadway show tunes discordantly on my aunt and uncle’s piano, was to one day be able to play properly, but neither of my two minimally sized keyboard-owning periods provided much motivation to learn. I needed a full-scale, eight-octave, brass-pedalled piano. Note: I’ve excluded ‘ivory keys’ which in today’s world would be considered an environmental faux pas and, indeed, across the globe, piano makers stopped using ivory in the 1970s or early 1980s, depending when their existing stocks expired. My newly acquired Heintzman came from another era when ebony and ivory were, sadly, the norm. If only we knew then what we know now!

The quandary, as always, was how to learn properly, not only playing all the right notes in the right order, but actually reading music off the page while doing so. Enter Michael Reason! Through a chance introduction at Lakeside Little Theatre in Ajijic, Michael’s wife, Sharon, happened to mention that they’d recently arrived in town, that Michael (a well-known Canadian conductor and concert pianist) was looking for musicians to join his newly launched orchestra, and was also offering piano lessons. Light-bulb moment (for the lessons, not the orchestra)! What a great teacher and mentor, who had me achieve something I never thought would be possible, but after four months of making great progress with Michael, we finally sold our home and returned to Canada!

Initially, there was considerable discussion about the expense of bringing the piano ‘home’ with us but, as it happened, the moving company was very accommodating and arranged for it to be safely wrapped, packed, and loaded with our other belongings, and it duly arrived in Nova Scotia. (Regular readers might recall my ‘moving in’ blog that mentioned the ‘sledge’ used by the moving men to bring the piano safely up a flight of stairs.) However, after exhaustively scanning the digital version of the yellow pages, and one mind-numbing telephone conversation with the only piano teacher who appeared to live anywhere close by, I asked Michael whether we might perhaps pick up where we left off long-distance, using Skype!

Now, my tech savviness is such that I didn’t even know whether this might work, but after a trial connection, and positioning my laptop camera in such a way that Michael could see my fingers on the keyboard, we were in business. Sadly, after three months with no piano on which to practice, my brain was decidedly rusty, and we also discovered, following a visit by a professional tuner, that the piano had come to the end of its economically useful life in terms of being accurately tuned without spending more than it’s value on installing a new pin board and other doo-dads. So, while I’m never likely to play concerts, continuing to learn to read and play music wasn’t something I wanted to abandon, I reluctantly decided the piano had to be laid to rest in favour of a new digital version. Thankfully, Michael gave me some recommendations that wouldn’t break the bank, and I’m now the proud owner of a new Yamaha (not the ‘vroom vroom’, fuel-guzzling kind) – eight-octave, brass-pedalled digital piano, that has the option to sound like a concert-hall grand, among other instruments, and with composite-veneered keys that have been weighted to play like a… regular concert-hall grand piano! More to report on my piano playing in due course…. 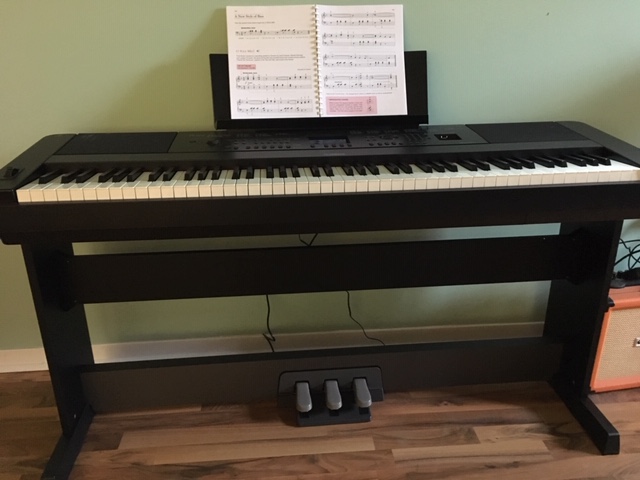 So, for the past week, having seen the devastation from hurricane Dorian in the Bahamas and the flooding as it moved northwards along the Eastern seaboard of the US, we’ve been closely tracking the storm’s path as it heads towards Nova Scotia. Worryingly, having originally been forecast for a direct hit as a subtropical storm, it was yesterday evening upgraded to a category one hurricane! Yikes! Thank goodness for the US presidential candidate (Marianne Williamson) who tweeted that the ‘power of the mind’ could turn hurricane Dorian away from land so we should be on our knees praying! Hallelujah! However, we preferred to place our faith in pre-emptive action so have already stashed anything outdoors that could take flight, removed all the bug screens from the windows to avoid shredding, and finished all the laundry by 8:00 a.m., the latter being ahead of the predicted power outages that we’ve been warned will likely be at least 72 hours. Laundry? On this one occasion I opted to toss all the wet washing into my hardly used dryer, rather than using the outdoor rotary and recovering the bed linens and my smalls at some later stage from Ireland! Finally, Peter tested the new generator. Yep! For once we didn’t prevaricate and decided we should perhaps consider buying a generator ahead of this coming winter, just in case. As it happened, a special offer from Costco had one delivered to our door just last week, so it’ll keep our fridge/freezer running and also the water pump for flushing the loos – ever-mindful of the well-meaning if somewhat controversial phrase: ‘Yellow, let it mellow; brown, flush it down!!!’

Yesterday, during a quick trip to town, we noticed that all the beachside campgrounds had already been evacuated ahead of the predicted storm surge (could be as high as 15 metres), and the coastal provincial parks are all closed until midday tomorrow when Dorian will already be north of us heading towards the St. Lawrence and Newfoundland. Thankfully there has been no evacuation advisory for our area, although residents in a few low-lying bays just south of Halifax were given a self-evacuation suggestion.

As the wind had already started to howl and was keeping me awake, we got up in the early hours to batten down our hatches, so it already seems to have been a long day, and it’s barely 8:00 a.m.

Hence, this updated blog in order to keep my hands and mind busy – or maybe I should wash the windows!!!!

Minus five hours – so signing off for now before we lose power… Have posted a prelim video on my FB page for viewing, but not yet as wild as it’s gonna get!