So much has changed about this city, yet everything somehow seems so familiar! I think it’s the way new buildings have sprung up among the old, so there are still so many recognizable landmarks – although the GPS will come in useful this first week as we navigate new roads that may not go in quite the direction we expect!

For the first time since we left NS, we woke up this morning to pouring rain, although it had eased by the time we left the hotel, and within 15 minutes everywhere was dry, so someone was definitely looking out for us today. (We’d already checked the weather for Calgary which was forecast to be a sunny 25 degrees.)

Although some people find the Prairie landscape uninspiring, there’s so much to see when you open your eyes. As many of you know, Peter’s passion (apart from me and the dogs), is bird photography, and one of his biggest disappointments about NS was the sorry lack of bird life – even hanging out numerous bird feeders on our 50 acres attracted only a small handful of species. And although Cherry Hill beach is a nesting ground for the endangered piping plover, this year saw the lowest number of breeding pairs in 40 years, according to a local woman who’s lived there for four decades and watched their steady decline. Peter did get some lovely photos of young chicks, but the NS birding experience was otherwise very disappointing.

So, driving for several hundred kilometres through the Prairies today we were excited to see virtually every slough (and we passed several hundred quite close to the road), full of ducks and shore birds, a wealth of raptors (Swainson’s, red tailed, and Cooper’s hawks, vultures, kestrel…). In fact, more birds in one day than we saw in NS since the day we arrived 15 months ago! Most exciting, however, in the midst of an endlessly cerulean Prairie sky there was one fluffy white cloud, and when I looked up, a pod of four white pelicans were drifting lazily on rising thermals of warm air. It made us wonder whether they might have been wintertime visitors to our former home in Mexico, Lake Chapala, which also saw pelicans in great numbers. Wouldn’t that by ironic?

Also greatly interesting, Chaplin Lake in Saskatchewan sees an annual migration of over 100,000 shore birds, including up to half the global population of sanderling, as well as important numbers of stilted sandpipers, red-necked phalaropes, American avocets – so Chaplin Lake will definitely be a birding location to visit in springtime at some point in the future.

The Prairies are also not a featureless flatland – far from it. At this time of year there are, of course, endless grain fields of white and red fife wheat, barley and oats waving in the breeze, train tracks – mostly single line with passing places – running parallel to the Trans-Canada highway for hundreds of kilometres, small farms surrounded by natural windbreaks of trees (yep – it’s a windy place), silos – from small to gigantic – announcing a variety of cereals and pulses… While there are some Canadians who may disagree, we never find the Prairies boring.

In fact, before I move on, I’m reminded about an old joke among the Prairie flatland dwellers that says, ‘if your dog runs away from home, you can still it running three days later!’

During today’s drive I also had to wonder whether a few Italians had snuck over to Canada ahead of later explorers, because parts of the Trans-Canada run as straight for tens of kilometres as some of the roads in Europe for which the Romans are famously responsible.

We were heading towards Moose Jaw when the Prairies gave way to undulating grassland, punctuated by both dry gulches and rain-fed ponds with abundant waterfowl. It was also an anniversary occasion for our 17-year-old Durango as she rolled over 230,000 kilometres – an auspicious occasion that amounts to nearly six times around the circumference of the world! The places she’s taken us, never letting us down, and sharing countless unforgettable experiences.

Finally, at 3:00 p.m. today, we rolled into the parking lot of Macleod Trail’s Holiday Inn, in south Calgary – our base for the next seven days while we reacquaint ourselves with the city, and also start the search for a new car, so it’ll be an emotional ‘goodbye’ to our faithful Durango – or maybe not. Peter and I are currently debating (me ‘yay’, Peter ‘nay’) whether we keep her for another couple of years as our ‘dog’ vehicle, so watch this space for possible tears and bloodletting in the coming days.

Then, tomorrow morning we’ll finally see our new home ‘live’ for the first time, having only done a long-distance video walk-through until now. But we were in no doubt that this is going to be a wonderful home in a great neighbourhood, where a good friend also happens to live. The current owners are scheduled to vacate on August 18, although they’re pushing their moving company for two days earlier as they want to have the house cleaned and sanitized from top to bottom before we move in – hopefully by August 21. We’ll then be ‘glamping’ for a few days as our furniture’s not due to arrive until week beginning August 24.

As promised, I’ll continue with my blogs, although perhaps not daily unless there’s a significant volume of interesting news – which will certainly happen during the week we’re spending in Banff from August 11. 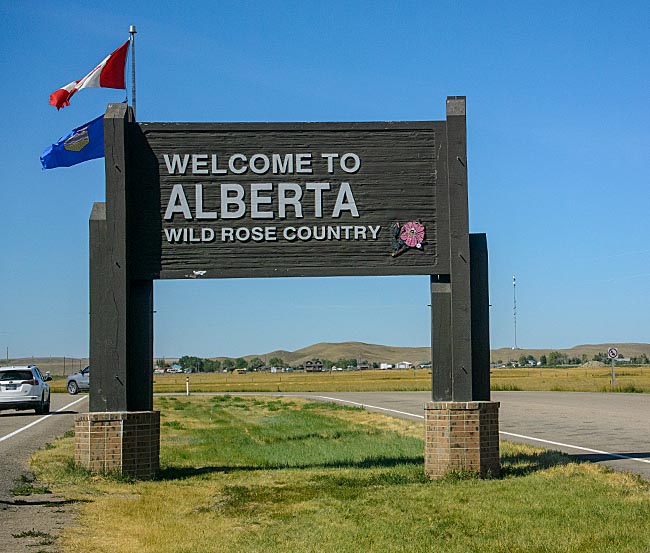 I’m thankful that our cross-Canada road-trip, which rolled to just over 5,000 kilometres was relatively uneventful – apart from the abysmal hotel and being front-ended by a reversing trailer in Wawa.

We witnessed spectacular vistas and inspiring landscapes – albeit from the highways rather than the byways of rural Canada. And I should also confess that the majority of photos that have illustrated my blogs were taken from either the side window of the car or through the windscreen as we passed by at 100 kph!

Until I return very soon…