Oh dear! Just when you might have thought I’d given up on my already abysmal blogging record, been abducted by aliens or passed through the door of an irreversible tequila haze, the bad penny has returned to bore your socks off once again.

Too many metaphors, mixed or otherwise, for an opening paragraph, I’m sure, but sometimes that’s simply how the brain/finger coordination operates.

It was quite a shock to see that my last post was November 20, but I’m sure I can conjure a thousand excuses – or, a few, at least – for this news breakdown… Starting with:

‘BARING ALL’ FOR CALENDAR GIRLS

Yep! For anyone who didn’t already know, just five weeks after we arrived in Mexico, I auditioned for a role in Lakeside Little Theatre’s (LLT) production of Calendar Girls. But, to start at the beginning… I’d found this theatre company’s website after we visited the area in March, and decided to join as soon as we arrived. As a joining member, I was invited to a tour of the facility, which happened to be conducted by the theatre’s president, Peter Luciano. And what a fabulous place it is! Imagine any renowned Broadway or West End theatre, and LLT is a glorious, miniaturized version, supported by a wealth of industry professionals who have retired to this area but retain a profound passion for ‘the stage’.

So, it was with some trepidation that I presented myself, having read the audition notice that stated quite clearly in black and white, the necessity for actors to ‘bare all’. However, before the auditions, the director spoke about her concerns for discretion and preserving modesty with the judicious use of props (and silicone boob cups!!!) both onstage and for the planned calendar. WHAT! Yep! I was offered the role of Ruth (played by Penelope Wilton in the movie) – and the calendar sales raised considerable funds for the pediatric oncology unit of Guadalajara’s sick kids’ hospital. 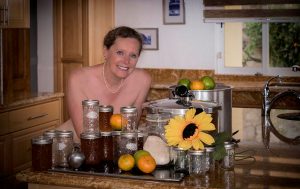 It was my biggest theatrical commitment yet, with rehearsals three hours a day, five days a week for two months, then two weeks on stage with dress and tech rehearsals, plus several ‘preview’ nights before we opened to 10 sold-out performances. Interestingly, having gone through the period of pre-production collywobbles, will I forget my lines, etc., once the curtain went up, and with 12 quick costume changes between scenes, I didn’t have time to feel nervous. Plus, as anyone who’s acted with me before knows, my pre-performance power walking, ears plugged into Adam Levine and Maroon V, shuts out everything other than climbing into my character’s skin.

Having closed on December 17, it was with something of a relief that Christmas was a quiet affair – a Mexican dinner of chilli, corn bread and flan with a couple of friends, and a similarly relaxed New Year celebration.

Thereafter, we started working with a realtor (one of my fellow Calendar Girls cast members) to find a property to buy – successfully, as it happens. This is quite a popular area, and inventory is typically low at this time of year, so the choice was fairly limited, but we happened on a property in San Juan Cosalá – a small Mexican town west of where we’ve been renting. Ironically, the house is in the same Raquet Club community where we stayed with our good friend, Linda Allen, last March. It’s bigger than we’d planned to buy – but at the right price and in a spectacular location. Large terraces on the main and lower floors share a wider than 180-degree view of Lake Chapala, looking down on San Juan Cosalá and beyond to the town of Jocotepec at the western end of the lake. It’s south facing (so watch for photo views of sunrises and sunsets), and high enough (600’ above the lake) to catch any breezes. We move in on February 26, and I’m sure we’ll be found swinging gently in our hammocks soon after.

There will, however, be no excuse for avoiding exercise as the house is on a hillside with cobbled streets, a 10-minute stroll to the community’s tennis courts, pickle-ball courts, and huge swimming pool connected to the local thermal hot springs. To say nothing of a huge, purpose-built off-leash park for the enjoyment of residents’ dogs. (Photos and more reporting will follow after we’ve moved in.)

For my birthday back in January, we arranged to meet friends at a local restaurant. Now, to back up in time to November 2014 and my first visit to the Royal Horse Show in Toronto, where I met a woman who has become a soul sister. Ironically, it doesn’t escape peoples’ notice that we could easily be  biological sisters (not least, thanks to the curly blonde hair when mine’s loose). Plus we’ve since discovered that we share some distant ancestral connections! Spooky, or what? 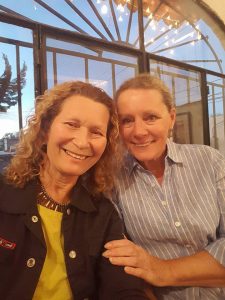 Anyway, Karen lives outside Ottawa, so after the Royal we didn’t have another opportunity to meet in Ontario before Peter and I returned home to BC, but we’ve always kept in close touch. After hearing about our move, Karen contacted me to say that her parents – very spry nonagenarians – had been visiting this area of Mexico for over 40 years, and that she and her husband usually headed south in January. However, as they would be driving down for the first time, she didn’t know exactly when they would be arriving in Ajijic. Wouldn’t you know it?! We’d just sat down in the restaurant for my birthday celebration, and who should walk in – Karen and her lovely husband, Steve. A happier and more joyful reunion couldn’t have been planned. Sadly, she and Steve were only here for a short while before heading home, but we snuck in more time together and will eagerly look forward to their return next year.

After we arrived, Peter started volunteering at the Lake Chapala Society blood pressure clinic a couple of times a month – alleviating his withdrawal symptoms from being a paramedic. In fact, he’s just been invited to work with two other medical practitioners to set up a first-aid course for local English-speaking teens which will run during their school’s summer semester. More info to follow.

He’s also playing tennis (even before we move to the Raquet Club) a couple of times a week, and gave a talk to a local photography group who’ve asked if he’ll return and do another.

Who needs Rio when we have Ajijic! Yep! The Mardi Gras festival in Ajijic was the fun-niest day of the year in terms of its parade – where it’s the norm for everyone to be pelted with flour and sparkly confetti – as you can see from Peter’s photo, as he was standing just in front of me taking photos and suffered the worst, or best, of it! There is also rather a strange tradition of men (‘zayacas’) being freakishly dressed as voluptuous women and other devilish characters! The zayacas throw flour on everyone to ward off evil spirits – so we should feel especially cleansed! 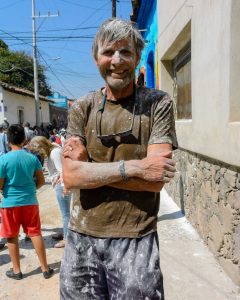 The parade was led by over 50 horses – all fabulously turned out, well behaved… And, remarkably, no evidence of any equine cardiac arrests give that they were surrounded by loud oompah bands. 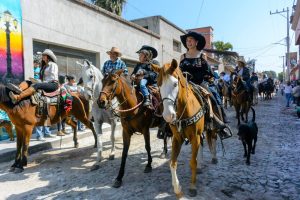 Coincidentally, the French ‘Mardi Gras’ (Fat Tuesday) is known as… ‘Mardi Gras’ also in Mexico, more commonly than the Spanish ‘Martes de Carnaval’ – the day before Ash Wednesday and the beginning of Lent. Of course, a journalist’s curiosity prompted me to investigate the French origins of ‘Mardi Gras’ and why it’s a global anachronism for wild celebrations. It appears, that the first recorded Mardi Gras took place in 1699 – and travelled to the United States with Frenchman Nicolas Langlois in 1703. The ‘zayacas’ seem to originate from everyone wanting to be carnival ‘queens’ – but also a way to let rip ahead of the somber time of contemplation before Easter. 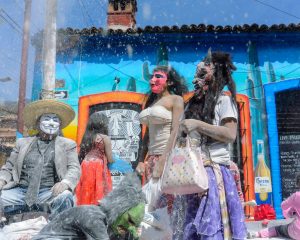 Every parade is preceded by the ‘running of the boys’ (which could be likened to Pamplona’s frenzied running of the bulls), who are trying to escape the zayacas, even though they actually loved being pelted with flour. 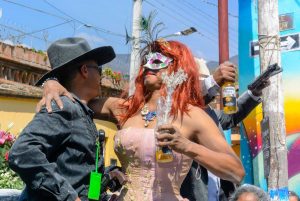 UNTIL NEXT TIME… When I promise I’ll try to be a little more regular with my posts. Meanwhile, hugs from both of us. xx