‘On the Road Again’…

Well! To borrow a few words from the husky-voiced country crooner Willi Nelson, we’re ‘On the Road Again; Goin’ places that I’ve never been; Seein’ things that I may never see again…’. In short, and to bring early closure to any suspense, we’re heading ‘home’ to Canada this very week. In fact, we’re on the road right ow.

So, I now need to write an opening paragraph to this blog that explains to all our friends and colleagues outside-Mexico what’s transpired in the past seven months.

Some of you who followed our Mexico adventure when it began just under two years ago, may have wondered about my blog silence for the past seven months. Truthfully, I didn’t want to jinx the sale of our property in any way, so kept ‘mum’ about our decision to return to Canada until the sale was finalized and our closing date confirmed – just last Saturday. As it happened, we’d anticipated closing the deal either this week or next, so we were already prepared and the moving company loaded our furniture and belongings last Friday, so we camped out in the house since then –using a small bed and a few furniture items we’ve sold to our buyers. Then, a phone call on Saturday from our realtor said things were suddenly moving, and on Monday he asked if we could sign the paperwork at the notary’s office in Guadalajara the next day (Tuesday). As Guad is over an hour closer to Canada, we decided not to dilly-dally, so loaded the car, and hit the road.

So, for our pre-Mexico friends, you may be wondering what prompted the decision to embark upon our sixth international move? Quite simply, the realization that we would never be able to call Mexico ‘home’ – which is an important distinction for both of us, rather than just ‘living’ somewhere. We’ve often said that we’re Brits by birth, but Canadians by choice, and while there is so much to enjoy about living in Mexico, there’s too much we miss about out adopted country, so it’s been tugging at our heart strings for some while now, And, as we’ve told ourselves, we’ll return with no regrets because we might otherwise have wondered whether living somewhere with sunshine for virtually 12 months of the year would suit us, and the dogs. Which it doesn’t.

I won’t even start explaining the process of selling our house, as it’s been stressful, frustrating, and energy-draining in equal measure. Of course, leaving somewhere that has brought us so many new friends is always tough – although quite a few have already intimated that they’ll be landing on our doorstep one day. Our Nova Scotia doorstep! Any further explanations about this decision will come later, after we’ve arrived – likely next Monday.

I also fear that I may be playing writer’s catch-up for a few days as I’m already behind in my daily musings and will be doing a rush job tonight to get something posted, so please forgive any typos or brain farts…. Things will improve!

‘On the road again…’ – with our new all-singing-all-dancing GPS guiding us out of the city and heading in the right direction…. Or so we thought. Anyone who’s read my blogs from our journey from Canada to Mexico using a borrowed GPS will perhaps recall that I said I’d never trust one again – after it got us lost twice. However, as with all new technology, our new device demands some attention and enjoys pampering to our preferences, had Peter installed any. So, when we started climbing into the mountains north of Guad, I questioned whether we were being led astray, once again. As it happened, Peter’s iPhone includes Googlemaps, so I entered our destination as Matehuala (our first night’s stop), and it gave a different, much quicker route. What the….!!!! After looking at the GPS ‘settings’, I saw it was showing to ‘avoid’ toll roads – the exact opposite of our preference! As soon as the GPS was recalibrated it concurred with Googlemaps, and so began a trek east and north-east to pick up the toll road we should have been on. I have to say, we saw some ‘interesting’ countryside – roads that were little more than cart tracks, bandits hiding around every corner (LOL) – but the scenic route had put us nearly three hours behind schedule. So we rather limped into Matehuala (having called and explained the delay to our arrival time) at 10:00 p.m., last night, exhausted and ready to fall into bed. Day one, and we had broken our cardinal rule of not driving on Mexican roads after dark. As it happened, we kept a good distance behind trucks lit up like Christmas trees, on the basis that they would clear the road of any livestock that may have been wandering dangerously close to the traffic. We also had to be vigilant regarding potholes, sinkholes, rocks, logs, stripped tires… and any other debris often found scattered across Mexican carriageways. Thankfully, no mishaps, and it was with a huge sense of relief that we finally arrived in Matehuala – the half-way point of our journey to the border.

Apart from being dog friendly and conveniently located, the Las Palmas Midway Inn should have a Michelin star for their breakfasts (we certainly didn’t partake of dinner at 10:00 p.m.) – wholesome, plentiful and extremely tasty. We’d also stayed here on our journey south in August 2017, so it was familiar territory.

Wednesday morning – refreshed, although the noise of barking Mexican dogs had followed us from San Juan Cosala, so it wasn’t the quietest night’s sleep – but we girded our loins and were ready for however long the US border crossing was likely to take. A couple of days earlier, we’d heard it was taking between five and 12 hours to cross in Nuevo Laredo, but checking the Government webcam and border waits as they were being updated,  gave us cause for optimism. At 9:00 a.m. this morning they were forecasting 65 minutes, which rose in 10-minute increments to 95 – then started a downward spiral (YES) around midday to between 30 and 35 minutes. However, once again, our anticipated arrival in Nuevo Laredo was delayed by over two hours due to roadworks south of Monterrey…. Grrrrr! Then, the outside temperature started to rise until it hit 42 degrees C. (The photo of a sweaty Paddington Bear was taken at 40 degrees, before my battery died!) 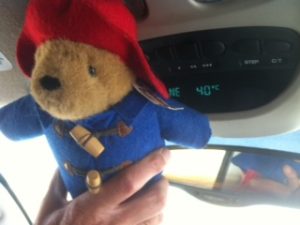 Phew!!! Thank goodness for an SUV with great air conditioning. As we inched forward towards the border (in the slowest moving line, of course), we saw cars being pulled over the searched – and held our breath as ours was packed to the gunwhales. As it happened, the guy checked our papers, looked at the dogs’ health certificates (a first at any border crossing), then waved us to pay the duty on the four bottles of red wine we’d truthfully declared (forgetting about the litre of brandy we were also carrying)! The customs officer was, lo and behold, a dog lover – made a big fuss of ours, charged us $13 duty on the wine, and waved us on our way. Ironically, at the 21-kilometer mark north of Laredo, the boundary of the free-trade zone, vehicles go through another inspection. We pulled up, Peter wound down his window, the officer asked “US citizens”. We replied, “No, Canadians” – at which point he gave us a thumbs up and a big smile – not even asking to see our passports! Easy peasy! I got the feeling he wasn’t a Trump supporter, so felt like asking whether we could PLEASE have a US-Canada border wall, but thought that might be pushing my luck.

Well – given the roadworks delay, we didn’t quite arrive in San Antonio – but stopped 40 miles short at a dog-friendly Days Inn for the night. Needless to say, in the middle of Texas oil country, the place is full of roustabouts with trucks the size of New England!!!

More to follow…. Tomorrow, from ‘On the Road Again’ – with Paddington Bear, of course.