Okay – for the gourmands among you, three culinary anecdotes to begin today’s blog that I think you’ll appreciate.

Texas really is a bloody big state. We departed just south of San Anton this a.m., and crossed into Arkansas at 5:00 p.m. this evening, via Austin, Waco, Dallas and Texarkana. Great roads all the way, including a ‘free’ toll road. At least, we think it was free! There were no toll booths, but a sign over the road said you could travel with a Texas tag, or you pay by mail – which we assumed to mean that somewhere along the road a camera takes a photo of your license plate, and you then you receive a bill! Whoops! Not sure how they’ll be able to track us down as within a few days of arriving in NS – because our BC insurance is due to expire – our car will be going onto NS plates!!! With any luck there’ll be a few more similarly regulated toll roads as we cross the good ole US of A.

I imagine that if they gave all non-US vehicles a freebie, it would still be cheaper than building high-tech toll booths that they’d then have to man 24/7, so perhaps it’s a win-win situation for TX – but it also gave us a warm fuzzy feeling to think we were escapees!

Driving the Texas highways in spring is certainly a treat for the eyes with the floral extravaganza of what I guessed to be Texas bluebonnets, as well as red, pink and white flowers that also carpeted the central reservation. Can’t put a name to them as they flashed by, but fully appreciated their colourful presence. 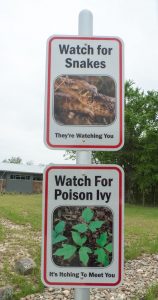 Wasn’t so enamoured, however, with the signs posted around the rest area where we decided to walk the dogs. ‘Watch for snakes.’ ‘Watch for poison ivy.’ Needless to say, the dogs were allowed to walk only six inches off the concrete path, while we kept our eyes wide open for anything that slithered….

By the by, Paddington (in his wellies and duffel coat) was definitely pleased with today’s cooler temperatures, as were we – the temperature ranging from 19 to a very pleasant 25 degrees C – and it should get cooler as we continue heading east into Tennessee tomorrow.

Many thanks to everyone who responded to yesterday’s blog – it’s great to be back writing again as our news unfolds. 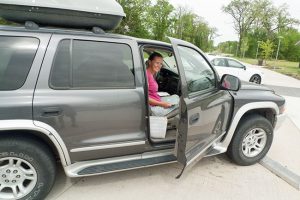 Until tomorrow… From Pip, Jenny, Paddington, Peter and Me. xx