Blah, blah, blah… Yada, yada, yada… This is about all I can say about the past three months of the Covid-19 lock-down, and the reason my blogging has been silent. At least self-isolating on 50 acres hasn’t been much of a challenge, although we couldn’t understand why walking along empty beaches was forbidden.

Do you remember those decades-old ‘futuristic’ sci-fi movies about pandemics and virulent disease outbreaks blamed on aliens? Da da! Not as daft as they seemed given the unprecedented unfolding of 2020. The predictions of Nostradamus certainly did(n’t) – depending on which news blog you’re inclined to believe. And, I’m sure we were all thinking short (i.e. a couple of weeks), rather than longer-term lock-downs and movement restrictions, so how stupid were we? Although the stranglehold on our lives now seems to be loosening, even the world’s foremost epidemiologists still seem to be scratching their collective, safe-distancing heads and predicting new ‘waves’ until a viable and efficient vaccine has been found. Which some are exclaiming could be years in the pharmaceutical pipelines. So, it’s seems that where ‘novel’ virus knowledge is concerned they’re…. Unknown until they’re known!

In conclusion, and to afford my brain and fingers further meaningful exercise, I decided to posit a PG-13/R-rated ‘what if’ scenario. What if: China had been honest and transparent (… pigs might fly!) when they first become aware of a virus that would ultimately kill many more people globally than the previous SARS (2002-2003) and MERS (2012) outbreaks combined. Maybe this would have kick-started travel restrictions much earlier, and perhaps averted the global spread of the virus, saving countless lives, businesses, furloughs, job losses….!

So, to leave this issue with a thought-provoking question: What if: Covid-19 had been allowed to run a natural course (i.e. no heroic measures for containment or social isolation). A great lesson in Darwinian theory? Or has the global lock-down provided a much-needed reassessment of the way we live our lives? Maybe! Maybe not! Greta Thunberg believes the world has perhaps arrived at a social tipping point that will steer the younger generations to do better in the future. One can only hope.

Indirectly, the pandemic’s consequences have impacted a great many of our friends around the world representing a vast spectrum of life: Professional actors who have been ‘on a break’ and are only now learning when their industry might resume; athletes who have creatively adapted to new training regimes due to imposed lock-downs; horse breeders who are facing 24/7 challenges during their busiest time of year; media friends and colleagues whose foreign work visas were rescinded and who found themselves forcibly repatriated and unemployed in their home countries; to say nothing about the now defunct Tokyo 2020 Olympic Games – and certain doubts surrounding 2021! The list could go on, and I’m sure we all know someone who has become a non-medical statistic in the Covid-19 scenario.

On the road again….

Of course, on a much lesser note, our plans to move hit a temporary road block due self-isolation, with few people setting foot outside their own homes for anything other than essential shopping trips. However, throughout the two-plus months of lock-down, our hopes were raised every time we saw a car stop at the ‘for sale’ sign, and a few vehicles even crept the 200 metres from the bottom of our drive for a furtive closer look. Eureka! As soon as the market reopened, we saw an influx of potential buyers, and sold before the end of the first week for a good smidgeon more than our anticipated price. We close on July 30 – so now the chaos once again begins.

Fortunately, we’d already exercised due diligence with regard to moving estimates, so a single phone call confirmed that our appointed team will be here at 9:00 a.m. on July 29. An online booking confirmed a room for one night at a local hotel before we sign off with our lawyer the next morning. Then, in the only-slightly adapted words of the inimitable country crooner, Willie Nelson; ‘Here we go, on the road again / Like a band of Gypsies we go down the highway / Goin’ places that we’ve never been / Seein’ things we may never see again / We’re the best of friends / Insisting that the world keep turnin’ our way / We can’t wait to get on the road again…. 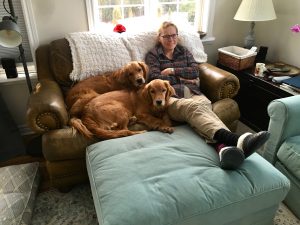 For anyone who’s known us for…. a longish time! You might recall that Cow Town, aka Calgary, was our first Canadian home town when we arrived as new immigrants in 1999. So, in reassessing our lives for the umpteenth time, and having decided that the very sound reasons for moving to BC in 2003 were no longer valid, we resolved to return to what had been a very happy stomping ground. To say nothing of once again living on the doorstep of Spruce Meadows; Peter dusting off his fly fishing rod; me trying out a new pair of skates on outdoor ice; crack-of-dawn swimming – indoors; soul enriching hikes in the Rocky Mountains concluding with a dive into hot springs – outdoors; canoeing the silent waters of Maligne Lake to Spirit Island; being enraptured by the Northern Lights dancing across the Alberta sky; re-testing my vertigo by stepping onto the glass-floored walkway of the Calgary Tower (yep, I’ll post a selfie if I don’t pass out first); and, last but not least, hugging old friends when social distancing allows.

Of course, having sold our home in double-quick time, panic set in wondering whether feudal landlords would be raising their draw-bridges on tenants with three dogs, and forcing us to resort to Plan B, which meant buying an RV! As it happens, we’ve discovered, or perhaps created, a new Calgary phenomenon, likely resulting from the ongoing oil crisis combined with rising Covid-19 unemployment. Far from being perturbed by our K9 family, we seem to be at an age when we’re considered to be responsible, sought-after tenants, especially as we’re no longer relying on jobs to pay the rent. So, instead of wrangling with other renters for the privilege of renting squalid hovels, we’ve found ourselves in high demand with landlords getting ‘excited’ to welcome us into their luxury, affordable, rental homes.

Great as this may sound, it’s certainly created a data-compiling conundrum and the need for a soul-searching GPS to navigate to our final ‘home’ destination. For the past few days we feel like we’ve been dragging ourselves through a foot-sucking bog, simply trying to narrow our choices to the top three, before we kick-start our wicked negotiating skills to cut a good deal. Walking scores, bike paths, hiking trails, off-leash dog parks, public transit, nearest supermarket, Costco, canoe launch, pickleball, swimming, skating, 10-pin bowling, proximity to mountains/skiing/snow-shoeing…. OMG! The list of priorities and activities is mind-blowing – and our brains may well explode before we make a final decision. However, I promise I won’t go silent for another three months, so you’ll need to check my next blog for concluding residential details

Well, we struggled through Ellie’s two months of lock-down; i.e. Peter sleeping in the ground-floor bedroom with her to avoid any stairs, which wasn’t easy for everyone, then several further weeks when we could allow her to go up and down, but with one of us holding her collar so she took each step very carefully. Her walks gradually became longer, with the introduction of some hills, but still no off-leash time. Finally, after sending another video to her orthopedic vet a few weeks ago, he suggested it was time to allow her some brief, controlled time off leash, but not with the other dogs when she’d be more likely to over-exert herself. Since then, we’ve seen a vast improvement, and have extended her afternoon walk to between four and five kilometres (45 minutes at a good walking speed) as well as a couple of five-to-ten-minute trips around the garden off leash so she can really stretch her legs, but without going crazy. She’s also been to the beach with Pip and Jenny for the first time since last October, and ventured out of her depth for a swim this past week, which I’m sure will be good non-weight-bearing exercise for her joint. She’s now 90 to 95% sound for most of the time, although after she’s been laying down in the evenings, she’s quite limpy for a few minutes when she first gets up. Aren’t we all? It’s very gratifying that this is the best we’ve seen her since last November when the injury first occurred, and we’re now optimistic that when she stops growing and her joints finally close in another few months, maybe, just maybe, she’ll be 100% sound. Either way, she’s such a happy-to-lucky soul that we’ll do whatever’s necessary to keep her as fit and well as possible. 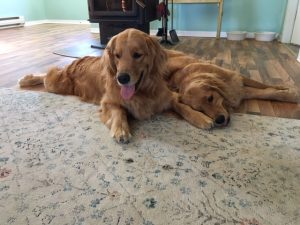 Coincidentally, although they’re only half sisters (same father), Ellie and Jenny are like twins. Although Ellie is still very slightly smaller than Jenny (but still growing), we’ve had to introduce different colour collars because we’ve sometimes found ourselves addressing the wrong dog!

As an ‘Ellie’ postscript, we’ve discovered that she’s definitely an early morning dog – 5:30 a.m. early! So, along with getting her regular training back on track after months of rehab, we’re setting our alarm for 5:30, and then start pushing it back, so hopefully she’ll understand that getting-up time is when the alarm goes off, and not before! Needless to say, we weren’t doing well on six hours of sleep each night, so for the time being are also going to bed at 9:30. I have to say that we’ve enjoyed witnessing some spectacular sunrises!

I thought I’d share an interesting discovery, which started as an experiment that went very right, for once! Last week, having made pots of chocolate for dessert, which uses only egg yolks, I decided to make my ‘white’ cake, which – you’ve guessed – uses only the whites of eggs. A great combination for using up left-overs in either direction.

However, I realized that I didn’t have the buttermilk the recipe requires. At this point, I should mention that I never buy buttermilk because I’ve thrown out too many partly used cartons in the past, so always use whipping cream that I’ve soured with lemon juice or vinegar as an alternative. On this occasion, no whipping cream in the fridge either, and only 0% skimmed milk, which is never a good ingredient for regular baking. In fact, another trick of mine to producing whole milk, when needed, is simply to mix whipping cream with skimmed milk to create the desired fat content for recipes. So, what I did have was skimmed milk and a tub of goat milk yoghurt, so I mixed the two together to a buttermilk consistency and, eureka! The cake actually rose better than the regular recipe, and was maybe also healthier with the addition of the yoghurt, so these will be my go-to ingredients in the future when a recipe calls for buttermilk.

Until next time, stay safe….