Well, it’s confirmed…. My blogging reputation has well and truly hit the skids, and is undeniably abysmal! My only excuse is that a professional career in journalism for nearly 30 years; i.e. writing to order, working on assignment or organizing members of the media at major events, has programmed me to invoke the ‘escape clause’ in order to embrace other aspects of my life whenever possible. It was a little different during the journey to Mexico, arriving at a different hotel every evening. It was relaxing to put fingers to keyboard and recall the day’s events and observations after taking the dogs for their evening constitutional.

However, since our arrival beside Lake Chapala, we’ve been quietly embracing a new and very vibrant lifestyle and, more to the point, unlike vacation time, we’re not cramming our days with all the local happenings, but rather pacing ourselves and adjusting to Mexican time – which hasn’t been at all tough.

So, to bring you up to date with life so far… (Another confession – I started this newsletter over a week ago, adding bits here and there, then decided today to post what I’d already written and catch up with more later…) 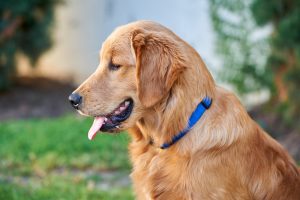 As some of you already know, our new pup arrived last month and what a joy she’s turned out to be, for both us and Pip. It was the first time in our 40 years of having dogs that we witnessed a family member grieving – which was the case with Pip after Elsa left us. Perhaps because it happened entirely without warning and, in fact, they’d had their usual morning romp just 12 hours before Elsa died. ‘Jenny’ – christened by her breeders and we decided not to change it – was nearly five months old when she arrived, and was eager to integrate but, in the first instance, Pip seemed confused, bemused and even slightly intimidated by this stranger in our midst.

However, as some of you may have seen from my Facebook page, this all changed a couple of weeks ago when Pip decided it wasn’t so bad having a new friend who wanted to chase and be chased as much as she did. Now, the path around the swimming pool is their Colosseum, first one way, then the other, and often facing off across the water, mentally debating which way to run. And for those of you who’ve met Pip and know how freakishly fast she can run, well on tight turns Jenny is nipping at her heels, literally, or managing to catch hold of the hair at the end of her tail, which is hilarious to watch and typically ends with a good-natured wrestling match.

A couple of days a week during my rehearsals (more to follow), Peter takes Jenny for coffee in the Lake Chapala Society garden, where passers-by are only too happy to socialize and interact with her. Let no one try to convince you that a golden retriever puppy isn’t a people magnet! The great thing here in Mexico is that dogs are welcome pretty much anywhere – even restaurants and, in fact, it was how our first two retrievers became such sociable and obedient dogs during our 10 years in France, as they went with us and were welcomed everywhere, so learned how to be well-behaved in any given situation. 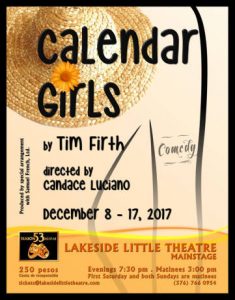 So, rehearsals? During our trip to Mexico in March I was introduced to both Naked Stage – a local readers’ theatre – and Lakeside Little Theatre (LLT). Both are phenomenal community drama groups that perform to sold-out audiences virtually year-round. Certainly, LLT produces six major productions a year, including one musical every Spring, so rehearsal and performance periods always overlap. We’d only been here a couple of weeks when I joined LLT and, as a new member, was invited to tour their theatre. And what a jaw-dropping tour it was. Imagine the swankiest West End (London) or Broadway theatre in miniature, and that’s LLT’s facility. Founded in 1965, it’s the oldest English-speaking community theatre in Mexico, and the quality of their productions are superb – which we witnessed when we attended a performance of Ripcord last month. I can say the same for Naked Stage, as their production of My Old Lady last weekend was brilliant in every way. The only thing currently missing from LLT is air-co – so during their 2018 summer shutdown it’s being installed, along with additional accessible seating and a much larger green room.

Anyway, I’d noticed that LLT was holding ‘open’ auditions at the end of September for Calendar Girls – their pre-Christmas production. Naturally, there was a requirement to ‘strip down’ on stage (discreetly behind appropriately positioned props, just like the movie), and also for a calendar that was being produced at the same time, and would be sold to benefit a local children’s leukemia unit. Yep, I’ve seen the movie – more than once– and LLT does not need a new settee! As the auditions were being held on a Friday and Saturday, I decided to skip the first day to give myself an additional 24 hours decision-making time, having realized I’ve grown more prudish with age – or is it simply a conscious desire to hide wrinkles, flab and cellulite?!!!  Well, Saturday morning came around and I decided to bite the bullet – thanks to some none-too-subtle encouragement from a couple of very good Gabriola friends with whom I’ve acted or had the privilege to direct in the past.

As it happened, I wasn’t overly optimistic given the number of people who turned up for the second audition, so went on stage with some trepidation. However, perhaps thanks to my maternal grandfather’s vaudevillian genes, I was determined to at least make the most of the acting experience, being in front of spotlights, on a proper stage, if only for the audition. Thankfully, a call from the director the very next day offered me the role of Ruth – the part played by Penelope Wilton in the movie.

Now, knowing the rehearsal regimes I’ve worked to in the past, to learn that the commitment was five days a week, three hours a day for two months…!!! Wow! But, that’s why LLT’s productions would hold their own against many professional drama groups and, so far, three weeks into the rehearsal period (off book for Act I as from today, Act II starting next Monday), it’s been an absolute blast. The cast is fabulous – much smaller than the movie, obviously, but the roles are evolving and developing into what should be a phenomenal production. So – if anyone feels like a trip to Mexico, performances open on December 8 – after a preview on December 6 –  and runs for 10 nights! Yikes – the most I’ve ever done in the past is four, so 10 is going to take me into totally alien territory, and I’m sure I’ll sleep around the clock when it’s finally over. As it is, already, whenever I wake up at some unearthly hour, my brain kicks into line-reciting gear.

Just to break the monotony of life in Mexico (!!!), I volunteered to assist in the recovery room at a free, bi-annual spaying and neutering clinic yesterday (dogs and cats) and worked, naturally, with the K9s. The final little guy on my shift, who resembled a wire-haired Jack Russell, was a street dog picked up by one of the vets, so arrived quite matted and hosting some active livestock! It’s impossible to avoid the clear fact that there are homeless dogs in Mexico – fortunately, not too many in our area as there are a number of rescue shelters, and many of the veterinary practices have a few spare kennels where they’ll take in dogs/cats until they can be rehoused. As it happens, homeless doesn’t mean hungry, as this little chap was certainly not malnourished and, as we’ve seen ourselves, people often leave bowls of food outside their gates so street dogs don’t starve.

It was explained, sadly, that any street dogs picked up for spaying and neutering are returned to the streets following their surgery as there are only so many available spaces in shelters – but at least they are now incapable of reproducing and perpetuating an ongoing problem. I confess that I was sad to let this little guy go, but was under strict instructions from Peter not to bring home any waifs and strays!!!

One other admirable aspect of this free clinic was the fact that a number of the volunteers were Mexican children who were capable young assistants learning about animal care from a young age.

Today he was giving a photography talk at Lake Chapala Society, focusing on his recent assignment as a photo manager of the Asian Indoor and Martial Arts Games in Turkmenistan. Think North Korea with mosques and you won’t be far from the truth….

(As it happens, given the time lapse, I can tell you that Peter’s talk was so popular that he’s been asked to do it again – with an ‘open’ invitation, rather than simply for members of the photography group.)