Last weekend, what I gaily referred to as a Christmas Fair took place in the grounds of Chapala Sailing Club but, in truth, the ‘Maestros del Arte’ aptly describes the nature of this event. It’s a gathering of ‘masters’, from throughout Mexico, who are invited to showcase and sell their remarkable, and mostly one-of-a-kind arts/crafts.

As it was our first visit, we spent Friday morning simply browsing – there was so much to see, and everything of the highest quality. At the same time, we couldn’t avoid comparing the prices to past experiences of Christmas Fairs in BC and elsewhere, and marveled at the affordability of uniquely original items that would likely fetch hundreds, if not thousands of dollars north of the border.

As it happened, with the looming expense of property buying/building on the horizon, we conservatively parted with 90 pesos (CAD$6!) for two handmade and painted Christmas tree ornaments, and not much more for a carved and colourful armadillo! (See photo.) 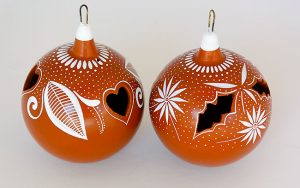 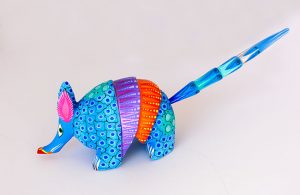 I also spent 200 pesos on a strip of raffle tickets that were being sold to benefit a local ‘Feed the Children’ charity. Lo and behold, on Saturday evening, the phone rang and we were summoned to collect a prize from the Feria on Sunday morning. All the prizes had, in fact, been donated by the individual stall holders – so whatever we’d won it was going to be a hand-crafted and unique work of art. And we weren’t disappointed – especially as it was an item for me, and something to wear.

A Mexican ‘rebozo’ is equivalent to a pashmina – a shawl – and can be woven out of a variety of different fibres, although may are heavy silk. Interestingly, given that silk is mostly associated with the Far East, it was fascinating to discover that many Mexican villages with weaving traditions now raise their own silk worms ­– both wild and cultivated. Even more interesting is the fact that silk can only be gathered twice a year and 20,000 silk worms are required to produce 10 kilos of cocoons – sufficient to make only four or five large rebozos. (I have to acknowledge our local English magazine, El Ojo del Lago (The Eye of the Lake), that published an article entitled ‘The Story Behind the Art’ from which I was able to gather this information.) The photo below is of the rebozo won in the raffle. 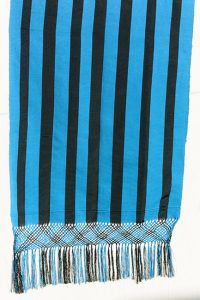 The silk is naturally dyed using indigo from wild bushes (indigofera suffruticosa) growing along the Pacific coast of Mexico, specifically in Oaxaca state, south-west of here. The indigo is extracted from the leaves, fermented and dried into blocks that are then sold to weavers and dyers, who grind it into a fine powder for use on protein fibres such as silk or wool, or plant fibres such as cotton. It takes 200 kilos of indigo plants to create one kilo of indigo dye. (As opposed to the synthetic indigo more commonly used for jeans and other high-volume fashion-industry garments.)

Of course, I didn’t know any of this before we collected our raffle prize, but it was important to me to meet and personally thank the artist who had donated the rebozo. As it happened, I learned that Cecilia Bautista Caballero holds a special honour in Mexico for being one of only four distinguished ‘master’ weavers.

Born in 1939, Cecilia is a proud descendant of the indigenous Purépech people from Ahuiran, in the state of Michoacán (bordering the southern shore of Lake Chapala). Her village lies on the Tarascan plateau near Uruapan. For generations, the women of this community have woven the classic indigo rebozos with black and light blue pin-stripes. Cecilia learned the art of back-strap loom weaving*, or patakua in Purépech, and dyeing from her mother. Starting her apprenticeship at the age of eight, she learned all facets of the process, including the knotted fringes that have rayon silk added on, with various designs used as ceremonial shawls in Ahuiran and neighbouring Tarecuato.

(*Back-strap weaving is ingenious by its simplicity – basic and primitive – with looms typically handmade by the weaver. It’s easily portable because it can be rolled up and set aside when not in use or when space is at a premium. As I don’t have a photo example, you can Google ‘back-strap weaving’ and find an gallery full of images that best illustrates this methodology.)

Cecila is also proud of the fact that she was the first weaver to experiment with placing real feathers in the fringes many years ago, an idea that came to her when she found out about feather work among the pre-Hispanic Purépech (or Tarascans). She has won many special awards for her weaving, including being honoured with a ‘Great Masters of Mexican Folk Art’ distinction.

Today, her five daughters and son weave together, working on the fringes and introducing new innovations, such as placing glass beads in the knotted surface.

Talking to Cecilia – thankfully through a translator as her Spanish appeared to be punctuated with her own Purépech dialect – was indeed an honour, and I couldn’t resist buying a second rebozo, for which she insisted I accept a substantial discount! (Purchased rebozo below.) 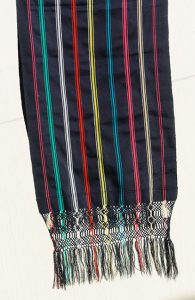 Such is the warm-hearted generosity of the Mexican people we’ve encountered, so far, and she was also delighted to pose for a photograph, as you will see. 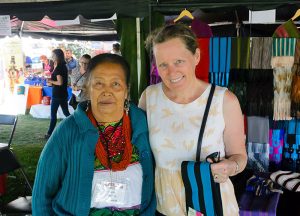 Interestingly, where faults or snagged threads are considered to be unacceptable in store-bought items using automated processes, they provide living interest and visual delight by the very nature of the items being handmade from beginning to end, in conditions and using equipment that might, respectively, be considered primitive and crude. Certainly every items tells a story, from raising the silk worms and harvesting the cocoons, spinning and dyeing the silk, creating colours using natural dyes, weaving on the simplest of looms…. And, now, I have two of Cecilia’s rebozos that will be an eternal reminder that high-tech isn’t necessary to produce such fabulous fashion pieces.