…This time in the shape of a new puppy. Ellie, a four-month-old golden retriever, arrived two weeks ago from Mexico City, via New York where I met our friends and her wonderful breeders, Teté Nevarez and Gerardo Garcia. She is the two-year-younger sister to Jenny, who came to us while we were living in Mexico. Many of you may recall that we lost Elsa, our beloved previous golden very suddenly in 2017 at the tender age of nine, literally on the day the moving men were packing up our Gabriola house, so I started looking for another as soon as we arrived south of the border and found Teté and Gerardo just four hours south of Lake Chapala where we were then living.

So, why Ellie, and why now? Well, I’m planning to extricate myself from 23 years of history as managing editor of an equestrian magazine in the not too distant future so I can finally ease into retirement. However, I’m a doer and organizer by nature, so I’ve been thinking about ‘stuff’ above and beyond our current recreational activities that would provide a rewarding occupation. Aha! As many of you already know, I’ve been professionally involved with horses for most of my working life, in particular the breeding industry for Olympic sport, but as I have absolutely no desire to ride or keep horses again, it crossed my mind that I could perhaps fulfill a different dream of breeding goldens. However, these days professional dog breeders will only sell females with a non-breeding contract, and typically require veterinary proof of spaying within six to nine months of the purchase, under threat of sanctions and/or legal action! Of course, with my knowledge and experience of horses, I appreciate their reasoning in terms of preventing indiscriminate breeding and upholding the qualities, conformation and health of a particular K9 breed, so I did, in fact, contact a golden breeder in NS, explaining who I was and that my interests were motivated by their own high standards. However, rather than a polite ‘no’, this put me in their sights as a potential competitor, but I won’t repeat the wording of their email response which was far from courteous and downright unprofessional, so moving on….

Since purchasing Jenny in 2017, we’ve got to know Teté and Gerardo, who shared their own story about creating their golden breeding. Both lawyers in the Mexican state of Michoacán – yep, the same state which has regularly been in the news for cartel-related murders and bodies hanging from bridges – they realized the stress of their work was taking its toll both physically and mentally, and yearned to balance their lives with a new and rewarding activity. Already dog lovers, they decided that breeding was the answer. However, after touring the show circuit in the United States and identifying good bloodlines, every door was slammed in their faces when they tried to buy a female without a non-breeding agreement…. And perhaps also because they are Mexican! Finally, after several more years of travelling throughout North America and getting to know people at the best shows, they met a breeder who decided their motivations were serious, and who was prepared to help them. So Garnev (an amalgamation of their two surnames) Goldens was born. Ten years later, and having since bred several US champions, we happened along and bought Jenny – after Teté and Gerardo assured themselves that we were indeed good dog owners who had owned goldens for over 40 years.

So, finding ourselves proverbially adrift in the same boat with unfriendly professional breeders, I called Teté and asked whether they’d consider selling us a female who would become the foundation of an as-yet-unchristened breeding enterprise, and I will be forever grateful that she immediately replied with a considered ‘yes’. As it happened, they had a female they’d planned on keeping from a previous litter, who was then three months old, that they suggested would be a great starting point for us.… And she was also Jenny’s sister – two years younger. Yay! Having already conquered the US show circuit, they’d been wondering how best to spread the word about their own breeding success into Canada, so this offered a great opportunity for mutual back scratching.

Of course, we then had to plan how we’d transport a puppy from Michoacán to Nova Scotia. So, having prepared all the necessary veterinary and importation documents, Ellie, then four months old, first made the six-hour drive from Michoacán to Mexico City, then boarded a flight with Teté and Gerardo (and three other dogs they were also transporting) to JFK, spent one short night in a hotel with me before boarding another flight from LaGuardia (note the change in airports…!) to Halifax, and another two-hour drive to Cherry Hill. Coincidentally, she walked in and made herself at home as though she’d lived here in a previous life!

I think I was more exhausted than she was, because runway repairs at LaGuardia (via Philadelphia) delayed my arrival time, so I missed the last shuttle bus to JFK to meet Ellie’s flight. Okay. Taxi! Except, road repairs outside the arrivals terminal meant taking another shuttle bus to pick up a taxi. Arrived at JFK around 9:00 p.m., and saw that Ellie’s flight arrival of 10:50 p.m. was on time. So found a quiet corner to read my book, and periodically power-walked to check the arrivals screen – when I noticed a 30-minute ‘in-flight delay’ (!!???) with a new ETA of 11:10 p.m. Then, at 10:30, their ETA had been brought forward again, and they actually landed at 10:38.

If you’ve never been to JFK, there is one arrivals terminal for all in-bound ‘foreign’ airlines, and between 9:30 and 11:00 p.m. on any given evening, there are around 20 major airlines with flights arriving at the same time, each with 200+ passengers and all their baggage on-board (including dogs), from Madrid, Beijing, Mexico City, Manila, Tokyo, Seoul, Frankfurt… etc. etc. And, in their infinite wisdom, the airport authority only saw fit to provide a miniscule standing-only area akin to a bull-pen for those awaiting flight arrivals, and of course you daren’t move otherwise an incoming sea of people flowed into any vacated space. So, there I stood, bearing in mind I’d gained an hour between NS and NYC so it’s already midnight and well beyond my bedtime! One hour, two hours, three hours…. Finally, Teté, Gerardo and trolleys with four dog crates, exited from baggage claim and customs at 2:30 a.m. Needless to say, our hope of having a quiet meal together went out the window, so after some quick hugs and doggie messages, I jumped into another taxi (big enough for Ellie’s crate), and headed to my reserved hotel close to LaGuardia and with free airport shuttles. Of course, although I set my wake-up alarm, your brain isn’t convinced, so you spend an unrestful few hours with little in the way of sleep.

Ellie’s now been with us for two weeks and became a member of our family from the minute she arrived. Being a three-storey house, we spent the first few days carrying her up and down to the garden, but she soon cast fear aside and decided she’d simply follow on Jenny and Pip’s heels, and now tackles the stairs on her own – which is just as well as she’s growing like a weed and getting heavier by the day.

Before I move on, the icing on the cake with Ellie is that Teté and Gerardo have offered us their US champion to be the father of her first litter – by AI (artificial insemination), of course. Yay!

I think my British roots are ensuring that I quickly adapt to the Nova Scotian way of life by cheerfully ignoring weather forecasts. Just last week people in far flung corners of the world, who obviously take a greater interest than I do in weather patterns and meteorological phenomena, started sending ‘stay safe’ emails and FB messages. Whaaaaa? I then noticed that a ‘weather bomb’ warning had been issued for our little corner of Canada, predicting high winds, torrential rain, and a potentially damaging storm surge for the following day. Okay, casting ambivalence aside, we duly kept an eye on the various local forecasts and experienced a mini Dorian last Thursday which caused a power outage for a couple of hours, soaked the dogs when they went for their regular walks, and prevented me hanging washing outside on the line, but was otherwise a fairly uneventful day. It seems that anything that isn’t categorized by name as a hurricane or typhoon, is now being called a ‘weather bomb’ – or am I really behind the times? We did notice some flying seaweed that found itself on the road once again, and at times the waves sounded like a freight train passing through, but I think we’re already becoming rather blasé about weather incidents.

Anyone who knows me well also knows that I read cookery books the same way some people read novels, so when a chef thoughtfully provides recipes as a vehicle for telling often hilarious stories about the cultural and social origins of ingredients, where and what to buy, and the characters who are credited with creating the dishes, it’s an absolute reading delight. If you throw in the Paris location and more than a smattering of the French language that stirs so many fond memories of our 10 years in France, I sprint to the kitchen, turn on the oven and start raiding the pantry, or start Googling where I can source fleur de sel de Guérande in Canada, or the best chocolate for bûche de Noël. The author, David Lebovitz, is a well-known chef in the United States who, many years ago now, decided to pack his suitcase and head to the culinary capital of the world, Paris. (Although the folks of Lyon might argue this fact given that many of their country’s gastronomic icons hailed from their own fair city: aka Paul Bocuse, for one.) Of course, I should add that I skipped over the chapters dedicated to carnivores, but it still left an amazing selection of veggie options and baking á la Parisienne, and I could unconditionally empathize with David’s inability to visit a fromagerie without buying an excessive quantity of cheese, because ‘intoxicating’ doesn’t do justice to the smell, assuming you’re not lactose intolerant or have a fear of eating anything enrobed in a fur coat of healthy bacteria!

Anyway, if you only share a small percentage of my own passion for cooking, My Paris Kitchen: Recipes and Stories should somehow find its way into your Christmas stocking – or at least try and find a copy at a local library and copy (okay – I didn’t really say that) your favourite recipes for posterity and weight-gain! I should also add that David has uniquely adapted some French-inspired recipes to cater to a more universal palate and popular North American diets, as well as considering the availability of certain ingredients without forsaking their Gallic origins.

But rather than ‘steal’ a recipe from the aforementioned cookery book, I thought I’d share another that I’ve used several times quite recently, and can truthfully say that these muffins (with apologies for posting another muffin recipe) have overtaken Peter’s previous double chocolate chip variety as his all-time favourite. And, it’s timely as we’re now into cranberry season. 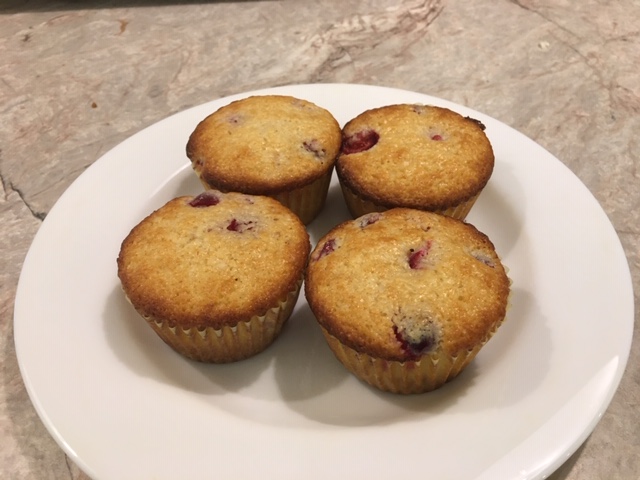 ¾ cup milk (recipes typically say ‘whole’ milk – which I never use, so I measure ½ cup of skimmed, and ¼ cup whipping cream)

1 cup cranberries (halved – although I’ve started making them with 1½ cups, which I think is an improvement)

1/3 cup toasted slivered almonds (topping – which I omit as Peter doesn’t like almonds, but they definitely add a flourish to the finished muffins) 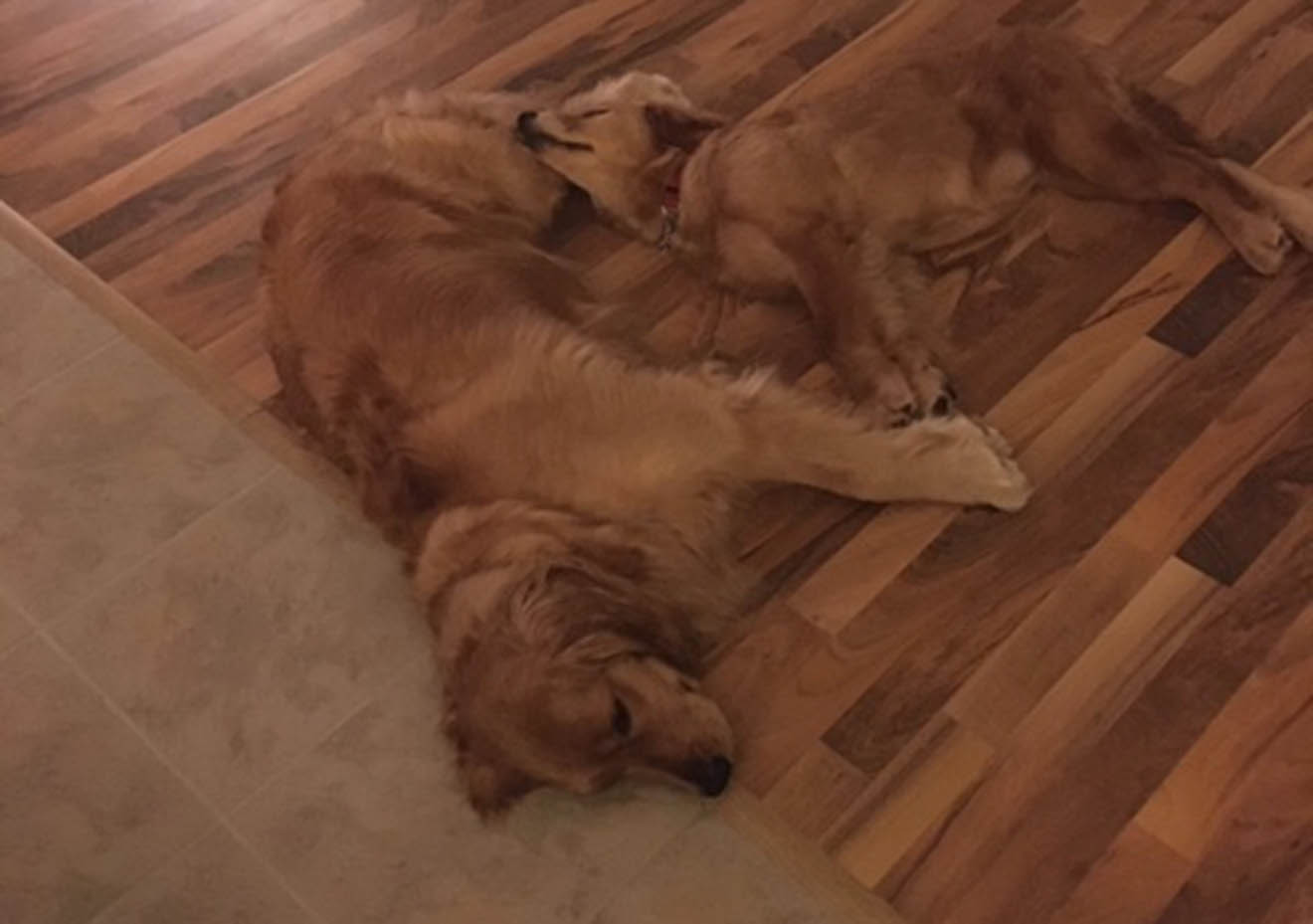 12 Replies to “Another hurricane arrives…”